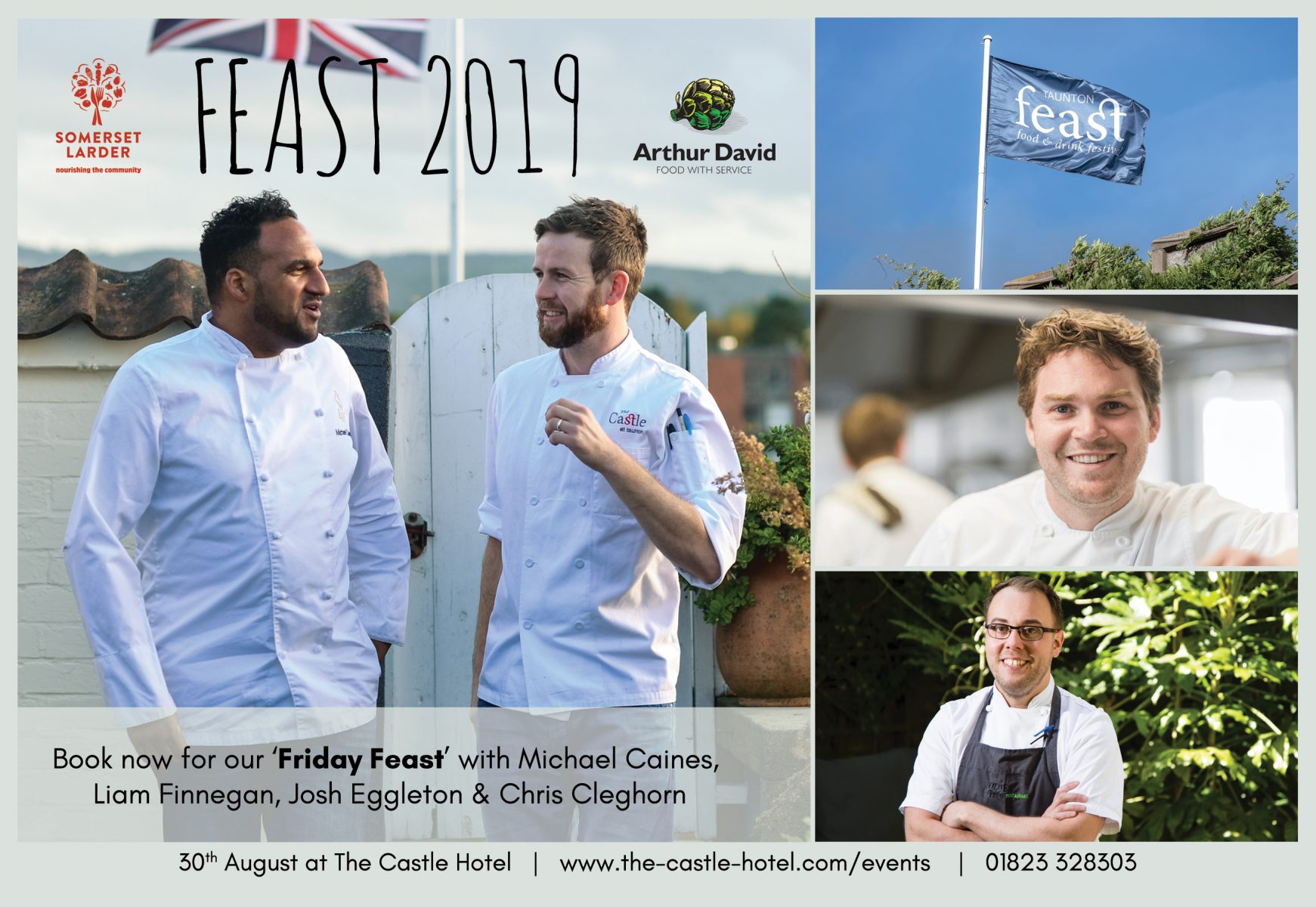 Feast food and drink festival returns to The Castle at Taunton with two gala top chef dinners, a new ‘pop up restaurant’ evening, more than 60 exhibitors and live entertainment.

The festival will start with a new social ‘pop up’ restaurant evening on Thursday 29th August with a different guest chef or artisan food and drink supplier running a stand inside The Castle Hotel.  Chefs include Jude Kereama (Kota), Louise McCrimmon (Harvey Nichols Bristol), James Mason (The Coach House by Michael Caines), Olivier Certain (Duende) and Liam Finnegan (The Castle Hotel).  Longman’s Cheese will be serving charcuterie plus there will be a fantastic selection of drinks suppliers including Joseph Perrier Champagne.

Since its creation in 2017, the festival has grown tremendously, helped in no small part by the support of sponsors such as Arthur David Foods, Somerset Larder, Vine Wine and FoodLover Magazine.

“Feast has really gained momentum over the past three years and we are enormously grateful to everyone who has helped to make it such a success,” says Liam Finnegan, executive chef at The Castle Hotel. “Our main sponsor, Arthur David, has played a key part in helping us to create a fantastic event for Taunton.”

“Hinkley Point suppliers, Somerset Larder, are sponsoring the Friday Feast with Michael Caines on 30th August, which is nearly sold out,” says Liam.

The Managing Director of Somerset Larder, Steve Braithwaite (formerly of Taunton’s Ministry of Cake) said: “I’m a great admirer of Michael Caines and it’s a real honour to be sponsoring this part of the festival. Like him, we at Somerset Larder are very proud of our west country roots and we’re looking forward to watching him cook using the region’s best available produce.

“The Feast festival is a brilliant opportunity for Somerset’s food and drink producers to showcase what they can do. Working with local suppliers, we’re aiming to expand our food service to other businesses in the UK, so this is an ideal event for us to explore what’s on offer.”

The popular Feast food market will be held on Saturday 31 August and will feature children’s activities, live music and more than 60 exhibitors on Castle Green.  The festival concludes that evening with a gala dinner in The Castle Hotel.

Tickets for the Feasts can be purchased online at www.feasttaunton.co.uk or by contacting the Castle Events Team on 01823 328303.