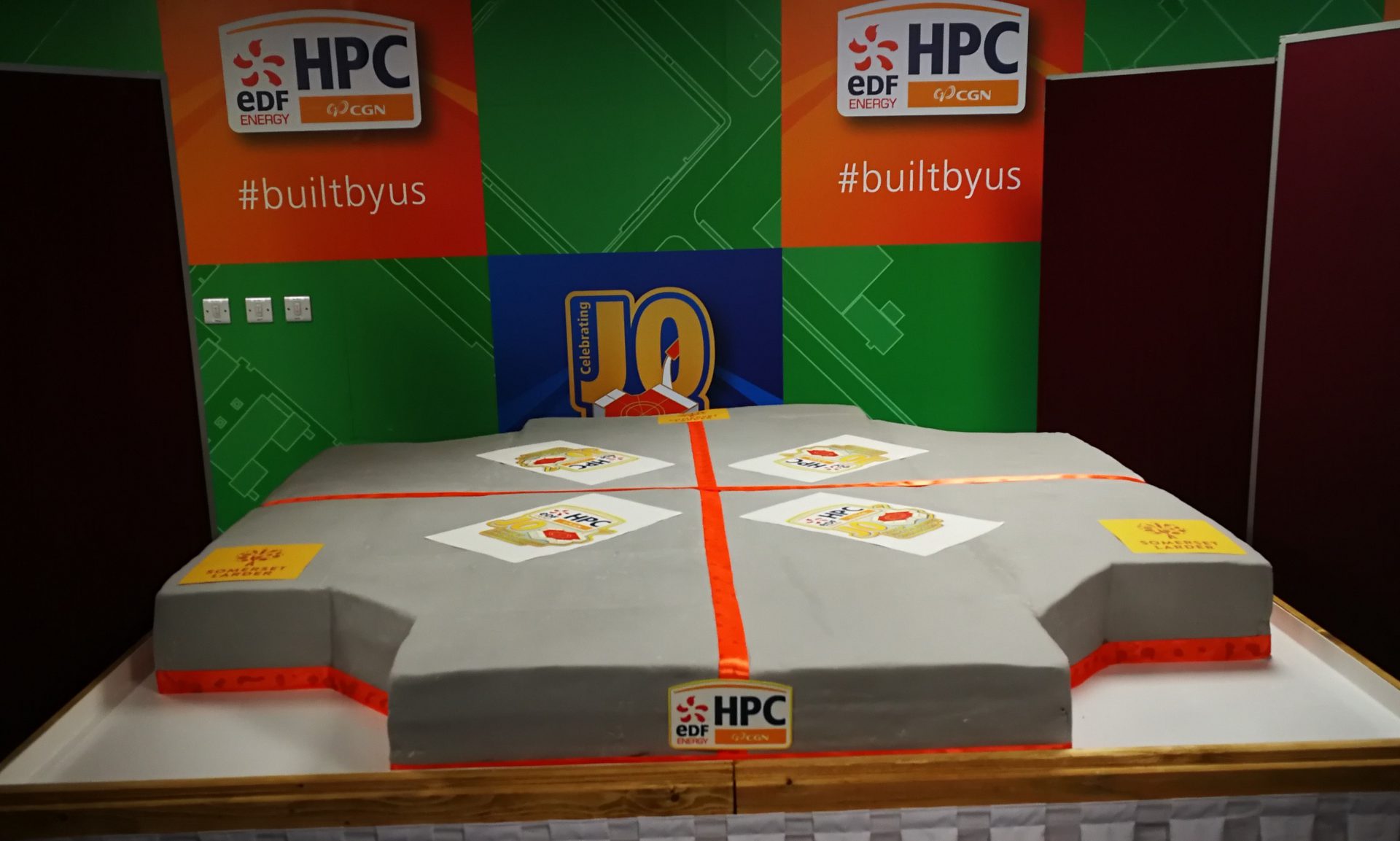 An enormous cake made by Bridgwater based Somerset Larder, to celebrate the completion of the first reactor’s foundations at the Hinkley C site, could make it into the record books. The six foot square, 600 kilo cake was baked to mark the completion of the base – a moment known as “J-zero”. The enormous iced sponge was cut at an official ceremony, attended by representatives of EDF Energy and the larger contractors involved with the project.

Somerset Larder contacted the Guiness Book of Records, which confirmed it was the largest cake to be made in the UK that it was aware of and definitely the biggest in Somerset! Further investigations are ongoing. The world record went to the Mohegan Sun Casino in Connecticut USA in 2004, which made a cake weighing a whopping 6.18 tonnes.

Made to look like Hinkley Point C’s nuclear island, the ingredients for Somerset’s giant sponge included:

In addition Somerset Larder made 3,000 cupcakes for visitors to take home.

Chef Damian Watts said: “This was a long time in the planning, the tasting sessions proved very popular and we ended up with a sponge with a slight Madeira touch which everyone loved. It was touch and go the day before, because it was so humid and we were worried the cake would be soggy. Luckily our kitchens are air conditioned so we were able to keep it cool, the heat made the transfers with the logos quite tricky to adhere at the last minute – but we eventually made it!

“All in all we are extremely chuffed with the result and were excited to be part of the ceremony.”

The Managing Director of Somerset Larder, Steve Braithwaite, is the former Commercial Director of Taunton dessert manufacturers Ministry of Cake and it was his idea to create the record breaking pud. He said: “This was a very significant milestone for Hinkley C so, as its main catering supplier, we were more than happy to help with the celebrations. I am very proud of my team and the work they put into this, I tasted it myself and it was pretty amazing.

“We might invite the Guinness Records adjudicators to witness the next one, for the final stage of the build. Getting into the official record books would be the icing on the cake!”

Somerset Larder was formed in 2014 to help the region’s food and drink producers gain a foothold into the large contracts available during the building of the new power station near Bridgwater. It uses locally sourced ingredients, including meat from Pyne’s of Somerset, vegetables and fruit by Arthur David, dairy by Gundenham Dairy, bread by Mortimers Bakery, coffee by Clifton Coffee and baked goods by M.J. Baker.

The central production kitchen, based in North Petherton, where the majority of food is produced and then delivered to the site. From there Somerset Larder caters for four restaurants, four coffee shops and numerous vending machines – feeding the 3,800 workers on site every day. It employs 135 people.