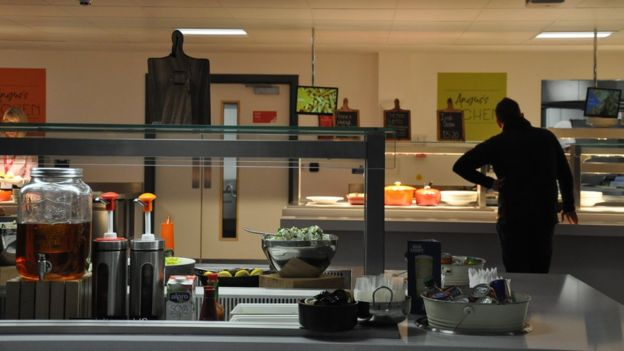 Some 2,500 construction workers in Somerset are building the UK’s first nuclear power station in a generation. Many are staying in two campuses built to help cope with this influx of workers on the Hinkley Point C plant.

Somerset firms were chosen to run the campuses and to provide food and drink, in a bid to help the local economy. While there were fears over the impact of so many workers, mainly men, coming into the area, police say they have dealt with just a few minor complaints.

One worker said staying at the campus meant he could meet people from different walks of life “so socially that’s a good thing”.

The two campus sites, at Bridgwater and Cannington, are both a few miles from the construction site.

From the very start of the project, EDF Energy said it wanted to use Somerset suppliers and employ as many local residents as possible. One example is a local company, Host Somerset which runs the two workers’ campuses.

The larger, Bridgwater-based Sedgemoor campus opened in October and can house 986 people. General manager, Paul Warburton said: “We’ve got 340 staff between both of the campuses and as they get busier the staff bases will move.

“This week we’ve got 120 working out of Sedgemoor and many of them are from the local community and can actually walk to work.

Caterers Somerset Larder are local and food is sourced in the area where possible. The ales available are also made in the county.

“On the supply chain we could have quite easily gone to big national suppliers, a big accommodation facilities management company to run the campus, a big framework contract to run the place, a national caterer to put the restaurant in place, all of that.

“But we chose the difficult route, which is helping local companies run the place and work in it as well.”